Bratislava, November 30, 2017 – SK+MED association insists on reconciling all overdue debt without making any compromises. The conditions of the approved reconciliation Concept of the Ministry of Health of the SR are liquidating and create a negative legal precedent in the European Union.

The State approved Concept of reconciling the healthcare debt robs state creditors. Millions of euros in debt reductions that must be provided by suppliers if they wish to join the reconciliation are set to condition the debt relief. Moreover, the Concept of debt relief only partially solves claims due by the end of 2016.

Although both the Government and the Parliament have approved the total volume for debt reconciliation of healthcare institutions, it has to be implemented in several stages and over several years. The economic situation of suppliers is considerably deteriorated by these actions.

Hospital debt by December 31, 2016 amounted to EUR 650 million, while the Concept counts in only EUR 585 million. Suppliers in the form of principal rebates must automatically provide the missing EUR 65 mil. They will actually lose their own money they are entitled to. By this action, the state becomes an untrustworthy and irresponsible partner for healthcare providers.

In addition, the first round of debt relief counts with only EUR 80 million, covering overdue claims only until the end of 2014. This is a nonsense happening in the European Union.

At the same time, the segment of medical technologies is in the maturity ensemble of debt relief at the absolute end, while these suppliers are the largest creditors and sponsors of the Slovak Healthcare. This segment is one of the most strictly regulated, even at pricing level, and it is absurd that these suppliers are being so widely discriminated.

Suppliers of medical technologies are the only ones who suffer from a long-term incompetence of the ones responsible and a disastrous financial situation of the Slovak Healthcare. In comparison, Hungary finances its Healthcare annually, just as it happens in Croatia, where the contractors are regularly fully relieved under the law without enforcing any concessions.

Suppliers of medical devices and special medical material will defend themselves using legal instruments against the illegitimacy of the adopted Concept. Some of them have already begun to exercise their ownership rights to a full extent through court proceedings – including interest on late payments and contractual penalties.

At the same time, SK+MED has also commenced an initiative with the European Commission, which emphasizes that the state action is in violation with the provisions of the EU Directive on Late Payments.

The Slovak Association of Suppliers of Medical Devices (SK+MED) is an association that currently represents the interests of 29 suppliers of medical devices active in Slovakia. It is a full member of MedTech Europe, an international healthcare organization with a registered office in Brussels that unites national associations of suppliers and producers of medical devices and technology from Europe. 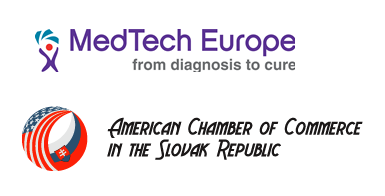